The connector is a Windows application that runs on the SMB user's local machine.

View the coverage of our QuickBooks Desktop on-premise connector in the Data Coverage Explorer.

Our connector provides a seamless and full featured integration to QuickBooks Desktop.

Before your SMB users can download and install the on-premise connector, you'll need to perform the following tasks in the Codat Portal.

Add your company branding: this is used in the link flow and in the connector app.

From the SMB user's perspective, they'll see the connector app as being owned and branded by you, rather than by Codat.

You can choose to configure the built-in Codat link flow for the connector. This will create a download link for the connector and provide the unique company ID (used as the license key) for each of your SMB users.

Here's how that looks to your users: 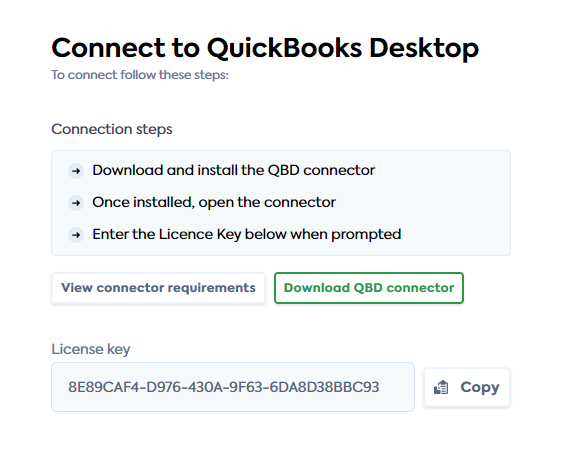 Alternatively, you can choose to build this functionality yourself using the Codat API. This involves calling the QuickBooks Desktop connector download endpoint (provided in the data connection response) and the customer ID. This allows you to maintain the look and feel of your company's brand, or to implement a specific workflow.

Enable the QuickBooks Desktop connector in the Codat Portal.

Here's how your SMB users interact with the QBD connector.

When installed, the QBD connector doesn’t require any further interaction by the SMB user, and administrator privileges are no longer required.

The connector has a UI that is accessible from the system tray. Your SMB users do not usually need to interact with this, but there is functionality available for advanced users, such as adding connections to multiple companies, pausing syncs, and manually starting syncs.

See Install the QuickBooks Desktop connector to learn how to set up and enable the connector.

Updated about 1 month ago